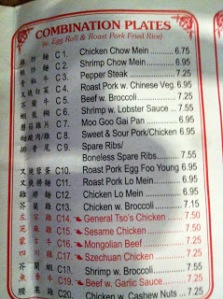 Strangely enough, as my husband and I prepare to move with our two youngest children to China, our house-sitter for our year abroad is our friend, Michael, who just arrived from China only days before we are to leave. He signed up to begin his Master’s degree from SUNY New Paltz before we knew we would be living in China for the year. He was coming to stay with us. We are almost literally trading places between Beijing and New York. To his nervous surprise, he is left alone in our 5 bedroom, 3-acre house only days after arrival. He will have to learn to drive on our streets, get to classes, shop, and find friends all on his own. We left detailed instructions and close friends as contacts for him, but he remains overwhelmed with the prospect of starting in the US.

Melanie, family friend and Godmother to one of our older children, and I took him to the “Great Wall” Chinese restaurant in New Paltz the day after he arrived. The food there is terrible, but exactly what you expect from a side-street mall.  I find it hard to get good Chinese food outside of NYC. My Chinese friends say you can’t get good Chinese outside of China. However, when I am craving some General Tso or Sesame Chicken, the “Great Wall” does the trick.  Mel and I thought it interesting that Michael got something we would never have thought of trying. He ordered in Chinese so I don’t know the name of the dish. We got Gen Tso’s and joked with Michael that we know there is no such dish in China. I told them both that I recently watched a fascinating documentary regarding the search for Gen Tso – who does not exist, like the dish, in Chinese culture. Michael’s food was more authentically Chinese.  Some type of beef with wide flat noodles and a brown sauce.He had asked the cook which dish was more Chinese and less American Chinese. He actually enjoyed it and said it wasn’t half-bad.  Mel and I shared our chicken and ate all of it. We agreed it wasn’t half-bad. We realized that this might become Michael’s touchstone place. He seemed to relax now that he had contact with the native Chinese-speaking people who were working there. This might be the one true connection to his homeland until he starts classes and finds other international Chinese students. His spirits were lifted after the meal. He asked the cooks where he could shop for Chinese food in the area. They said he had to go to Flushing, Queens or Fort Lee, New Jersey. We could have told him that.

I wonder about his acclamation to this country compared to ours to China. Only 2 days till take-off.

View all posts by abergeson2013